Here's my story, up until today. I will try to update often.


In 2004 I learned that I had PCOS - polycystic ovarian syndrome. It's an endocrine disorder that makes my hormones all funky, and directly stopped me from ovulating. At the time, there was no desire for children, so birth control sounded like the best plan.


Fast forward to October 2010. I'd been married for two and a half years, and we decided it was time to stop not-trying! I stopped taking my birth control pills and waited for my period to come.


On CD21, I went in for bloodwork. They checked my progesterone levels, which will show if I ovulated or not. It's done on CD21 because during a "normal" cycle, women ovulate on CD14, and the progesterone should peak at 7 days past ovulation. My levels were around 7ng/mg. They should be around 10 if I did ovulate.. so not this time. The doctor increased my Clomid prescription.


My next cycle started on 04.04.12. They told me to take the clomid on CD5-9 again, like last time. This cycle, I decided to start using ovulation predictor tests. They're just like pregnancy tests, but instead of telling you that you're pregnant, they let you know when you're having a lutenizing hormone surge, or LH surge. 12-48 hours after the LH surge, you will ovulate.


My LH surge didn't happen until 04.21.12. My CD21 bloodwork was done on 04.24.12. Of course, my progesterone levels came back extremely low, 2-3ng/mg. I let the nurse know that my LH surge did not happen until Saturday, so I didn't expect the test on Tuesday to show anything.


The day before my next expected cycle, I was getting antsy to know whether this round of Clomid was successful. I knew that even though the blood test says I didn't ovulate (strictly because of timing), I knew I had shortly after the LH spike. I decided to test when I got home from work. 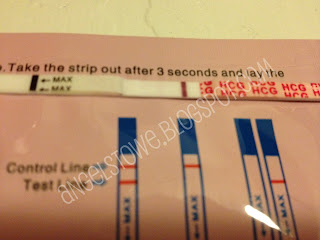 I know it's a little blurry. It was hard for me to see, too. I was worried that it was just my eyes playing tricks on me. If you still can't see it, look directly below the "3". There's the faintest positive line you've probably ever seen. I waited until Ron got home from work and showed him. I took 4 other tests that night (once I drank enough that I needed to pee again..), and they were all just as faint, but still just as positive. My first positive pregnancy test: Wednesday, May 2, 2012.

I called my doctor the next day and asked for a blood test. I went in at 4:00pm and had some blood pulled. I didn't get the results back until Friday afternoon.

During the blood test, they pull the numbers of my hCG (human chorionic gonadotropin, the "pregnancy hormone") levels and my progesterone levels. My hCG was at 30, and my progesterone was at 9.7. This is an acceptable range for it being so early. I go back in on 05.07.12 to make sure that those numbers have doubled, which will indicate that the pregnancy is moving forward as scheduled.
Posted by Angel Stowe at 2:00 AM